Wednesday morning 9am. (Well last Wednesday anyway.) I arrive at OakHaven Montessori for my first elementary observation. I’ve observed my boys in the primary setting a bunch of times from the ages of 4-6. Only now have I  finally gotten around to make an appointment to come sit and observe the elementary. I feel like a terrible Montessori parent. The school year is half over and I’m just now getting in there. What freedom I have in being allowed to come in and observe almost any day I want and yet I allow life to get in the way.

Upon entering the school I quietly hang my coat in the foyer. I can see Aiden in the other room and my movement catches his eye. He shuffles over and greets me with a smile and a hug.

“Are you here to observe now?” He asks quietly.

“Yep. Can’t wait.” I reply. And he heads right back over to his work.

Even in the primary setting Aiden had the ability to greet me and promptly resume his work. Of course every minute or so he would glance at me sitting in my tiny chair just to make sure I was observing him. But my presence never appeared to be a distraction. Christian, it seemed, required a little more attention before getting back at it. And even then he wanted me to be really close to him, or follow him. I’m all too happy to oblige of course, yet ever mindful not to interrupt or involve myself in his work. After all, I’m not here to help, but rather to observe. They are two wonderfully unique twins that I never cease to learn from. They’ve easily taught me as much about myself as I have attempted to teach them.

The primary setting was always such a fascinating, not to mention amusing, place for observations. Each time I left I had a new story involving a different child that was fascinated by my presence. Being tall always draws curious stares from the small. On one occasion I had quietly entered the room and taken my seat by the door when a little boy strolled by and stood next to me. Just stood there. Didn’t say anything, just stared at me. I love that children can stare and stare and stare and not be judgmental. They’re simply fascinated by what they’re seeing and don’t mind feeding their starving eyes. I wish everyone retained that quality into adulthood.
So after a while, this boy grabs a nearby chair and drags it over directly next to mine and takes a seat. Now he and I are both observing the classroom. A couple times I notice we are sitting in the same position. Adorable.
On another occasion I had a little girl approach me and say, “You smell good. My dad wears perfume too,” then walk away. How awesome are conversations with kids?!? They say what they have to say and that’s it. There’s no small talk, no uncomfortable silence, just ‘you smell great and now I’m going over here to draw a picture.’ Wonderfully efficient creatures at times.

So now we’re in the big leagues… the elementary. We’ve graduated from the primary to the big house, which is quite literally, a house. The house on the property was converted into an elementary school setting yet retained all the warmth and comfort of a home. What better place to learn than in a warm, inviting, peaceful home setting?

I make my way into what used to be the dining room and find a seat at a tiny table. Christian notices me from the kitchen where he’s working with two other children and drops by to say hi and give me a hug. Although visibly excited by my presence, he too promptly returns to his friends and his work, a bit to my surprise. He’s growing independent. Am I ready for that?

Aiden sits on a bean bag writing something. He pauses, clearly deep in thought as evidenced by the slightly animated, quizzical look on his face and pencil tapping on the temple. He draws his conclusion, makes the final markings on his paper and heads off to another room. He returns shortly thereafter to pick up his space… 4 pencils and a tray… and return those items to their proper place. Everything has a place. Everything at home has a place too, but often times they don’t quite make it back there. Another Montessori parent failure. I wish there was a Montessori parent support group. I digress.

Aiden returns again, this time with brother Christian, and their teacher. They spread a mat out on the floor. My boys are getting some sort of lesson on triangles. They’re not sitting in a desk, eyes front, listening to their teacher talk at them. They’re all three on the floor together, engaged in the task at hand. Other children are scattered about in different rooms working on their own tasks, individually and in small groups. 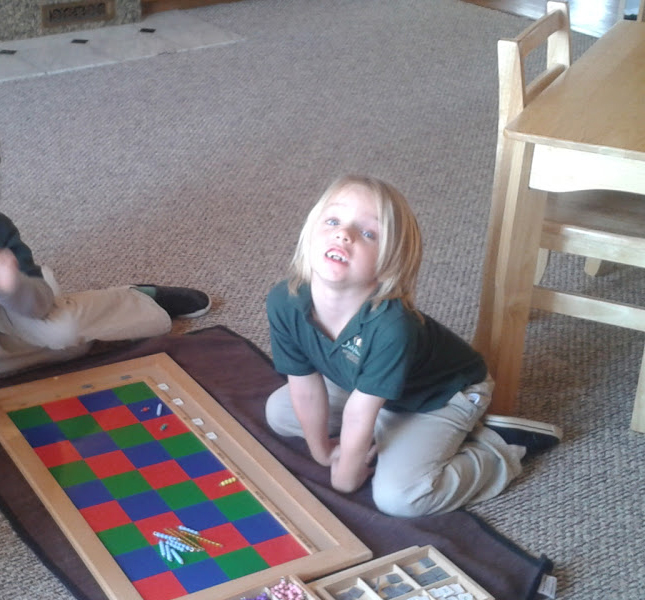 They open a wood box containing sticks of varying lengths and colors, and begin assembling the sticks together with brass fasteners into different types of triangles… scalene, isosceles, equilateral.

*Confession: I Googled how to spell ‘isosceles’, and during the lesson was only able to identify the equilateral triangle by name.*

The name of each triangle is briefly dissected, back to it’s root meaning, drawing a bit of history into this geometry lesson (I think). Everything is so interconnected that sometimes it seems the lessons span multiple subjects. I love how everything is tied together.

My boys are asked to create specific types of triangles and do so enthusiastically, measuring out acute and obtuse angles with another little object I can’t quite identify.

Years into my kids education everything about the Montessori experience is still so unique and wonderful to me.

On the surface, Montessori appears very loosely structured, and in one sense that would be correct. There is freedom of movement and freedom of interaction with peers. The children enjoy many freedoms within an environment that is carefully and thoughtfully arranged. So the children enjoy much more freedom throughout the day than one would at a public school, yet there is structure. It’s just that the children actively participate in the structure… and in the framing and shaping of a sense of community. It’s this openness and freedom that fascinates me. Surely 1st, 2nd, 3rd grade children would go berserk with that much freedom, right? Surely chaos would ensue. Not so. Quite the opposite. Of course they might have to be reminded occasionally to stay on task, but since they’re the ones who chose the task in the first place, returning to that task generally isn’t an issue.

I have to admit, Montessori is not always something I understand. Public school I understand. I lived through it. On the surface it seems very logical and efficient. Days are generally predictable, with each day organized into blocks of time. At the appointed time children are to learn a specific subject. At the end of that time, finished or not, they move on to the next appointed time, all the while being categorized by grades. Efficient, right? Perhaps a little like cattle though.

But what if children don’t learn according to appointed times, or even according to appointed seasons? What if a child is ready to learn something well in advance of a “government appointed time”? So then what if a hungry student was fed and fed and fed until his mind’s content, rather than force-fed when he’s not? It seems rather obvious to me (only now, after having children in Montessori) that an interested child will learn and retain knowledge far better than one who is not. Shouldn’t we seize on those moments when a child is not only ready, but actually excited, to learn? And shouldn’t that excitement and genuine interest in learning be their motivator rather than a grade? I want my kids to learn for the sake of learning, not for a pat on the back and a gold star.

Somewhere along the way the industrialized, assembly-line method of educating children began to fail us, as evidenced by our ranking in education worldwide. What I don’t understand is why people are so offended by that statement. Times change, methodologies change, technology changes. That’s why some companies grow and change and flourish, while others stay the same and die. Our public education system has stayed the same and is on life support.  I believe in public education, just not in it’s current form. There is a better way I’m convinced. I just wish more people were exposed to the Montessori method so they could see the benefits firsthand. You want a changed world? Change our schools. Invest in education. Nurture little minds. It will take time to change the public education machine, and change is not easy, but good things never come easy.

You want to observe the future? Observe Montessori.

You want to observe now? Let me know, I’ll take you with me any day you want.