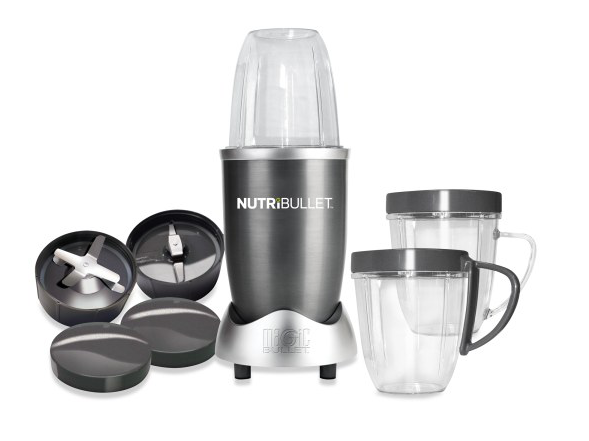 It’s amazing! It’s fantastic! It slices! It dices! It mows the lawn and takes out the trash!

**Actual results may vary, but I’m definitely smitten with my NutriBullet.  Should have called it NutriAWEsome.**

Seriously though… Best. Present. Ever.

Who needs teeth?!? I’ll drink my meals from now on thank you. And here I felt sorry for old folks with no teeth, having to drink meals or eat only soft foods. See what I’ve been missing?

“But dad I don’t WANT to brush my teeth.”

So I saw this thing on TV while in Las Vegas for my half-marathon. Not sure why I was watching the infomercial… probably just trying to keep my mind off having to run a half marathon. I can’t stand informercials and the guy on this one was a tool. Surprise. Really the worst part are the overly enthusiastic idiots in the audience that bob their tilted heads, “oohing” and “aahing” at everything the guy says. Really? You’re THAT impressed huh? Well. That’s terrific.

It’s not a juicer. It’s not a blender. It’s an “extractor”. Everything you put into it is liquified so you get the juice and all the other nutrients usually left behind by juicers. I still own my Jack LaLanne Power Juicer but will never touch it again. What a pain in the ass that thing is. You spend half your time chopping up the food before juicing (ya, it says throw foods in whole… right) and the other half cleaning all the parts when finished. Plus, you spend about 50 bucks for a small glass of carrot juice and have enough pulp left over to mulch a flower bed.

In all honesty, this little gadget is amazing if you love smoothies like I do. Added bonus… these smoothies are good for you. REALLY good for you. Plus, my kids don’t know or don’t care they’re drinking spinach, kale or chia seeds because all they taste is the fruit.

But the best part about this thing… it actually works.

I really haven’t dove into the recipes that came with my NutriBullet yet because most things kinda taste similar once they’re all thrown together. There are 2 huge exceptions… broccoli and raspberries. One little broccoli floret throws everything off. Not totally horrible if you like broccoli, but definitely a distinct flavor that I don’t often associate with “smoothie”. And raspberries are good and sweet but they have this floral, almost synthetic potpourri-like taste. Not that I know what potpourri tastes like, but I’m assuming that’s close. Bananas could be considered a third I guess, but in a different sense. Bananas will subtly take over the flavor of any smoothie, but will also fix the flavor of any smoothie-gone-wrong… assuming of course you like bananas. So basically bananas are like the duct tape of fruits.

Kale, carrots, spinach, cucumber, raspberries, strawberries, grapes, chia seeds, apples, pears, oranges, pomegranate, mangos, blackberries, celery, pineapple. All great. You could literally throw a dog turd in this thing with some kale and frozen fruit and it would be great.

**In no way do I endorse, condone, or advise the use or ingestion of dog poo, or any other fecal matter, in conjunction with the NutriBullet or any other blending, juicing or extracting device.**

And actually, I would probably avoid pomegranate too unless you don’t mind that gritty, seedy consistency. Oh, and make sure you core your apples first. Apparently when apple seeds are broken down they degrade into a form of cyanide. No, never enough to kill you or an unsuspecting spouse, but still, remove the seeds man.

To operate, simply fill half the container with veggies and half with fruits, then add a little water to thin it out. (I always top off with frozen fruits… usually mango… to make my smoothie frozen, and a little sweeter. Room temperature smoothies, especially the ones heavy with greens, can be a bit much to choke down.) Attach (screw on) the blades to the cup, turn upside down and insert the base, then twist to power on. Boom. Magic juice. Just one setting… ON. 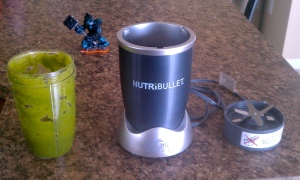 (The little guy who happened in on the background is my boys’ Wii Skylander Giant, appropriately named Crusher.)

Clean up is just as easy… simply rinse the cup and blades. Cup can go in the dishwasher, blades cannot but easily come clean by spraying with water.

There it is. There’s more to it, but they’re sold at Bed, Bath & Beyond for $99.99 so go get one and figure out all the rest of the gloriousness for yourself. And tell them I sent you, then let me know what they say.

PS… anything frozen, plus Bacardi and Malibu. You’re welcome.