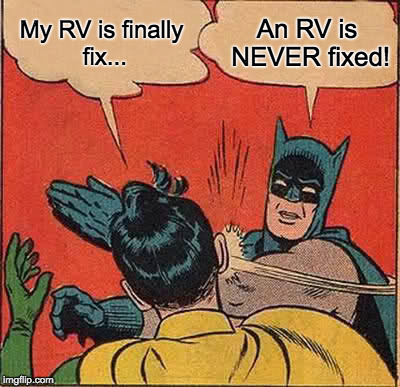 Owning an RV has been a roller coaster of emotion, and for a guy as emotionally unstable as me, another ride with huge peaks and deep valleys is exactly what I need in my life. 😳

Each day brings new challenges. And it seems as if each accomplishment only exposes 3 more obstacles to overcome. It’s exhausting. And expensive. Because apparently everything costs 10 times as much when it’s on an RV. I replaced the broken plastic 12V light fixture with a new LED one for about $40.00, which seems overly expensive for a crappy little plastic fixture.

Fresh off that little success, I ventured up onto the roof to see why our front air conditioner rattles. After removing the A/C cover I discovered I have no idea what I’m looking at so I replaced the cover and walked away. Before climbing back down I noticed the little round plastic plumbing vents for the bathroom were all dried up and falling apart. $5.00 apiece plus some $10.00 lap sealant and boom, another job well done. I should be an RV tech!

But my excitement was short-lived. Some more inspecting revealed the edges of my roof are in pretty rough shape. The sealant had all dried up and is coming apart. No holes in the roof yet, or leaking inside, but it’s in desperate need of repairs ASAP.

The previous owner claimed it was garaged when not in use. Garaged my ass. This thing sat out in the scorching Texas heat. Chalk it up to us not having any idea what we were getting ourselves into. I can tell you the next time we purchase one, if we ever purchase another, we will know what to look for. This little roof endeavor won’t be terribly expensive…2 rolls of 50′ EternaBond tape, plus spray cleaner and primer, another couple tubes of lap sealant…about $200.00 total, and all damn day on the roof, in the hot sun. Just waiting for a break in the summer heat to climb back up there and knock it out.

Meanwhile, down on the ground…

The electric retractable steps in our coach made a horrible banging noise each time they tried to retract. But they would never fully retract, remaining partially extended about 3 or 4 inches from the coach. Some people might be able to live with it, but those kinds of things drive me nuts. I decided to give it a go myself. When I had the coach in for repairs for leaking fluids, the tech mentioned something in the step mechanism was “missing teeth”, but I wasn’t really sure what he was talking about at the time. So I crawled underneath the Beast and felt around and quickly discovered the teeth that had been sheared off on the underside of the gear. I Googled the part, found it was in stock nearby at e-trailer.com for about $50, and picked it up the next day.

Replacing this gear probably would have taken an RV tech about 20 minutes. I was under there a solid hour, lying on a gravel driveway, in 100° weather. But I did it. And it works perfectly now. And I felt like a mechanical genius. But while I was under there I noticed some parts in the front end that were still wet from the previously “fixed” fluid leak. Terrific.

Back to the inside…

The illuminated on/off rocker switch for the electric water heater does not light up, which I’m assuming is the reason we could not get hot water?? Replacing a switch seemed like an easy enough task, so I searched all over the interwebs and found what appeared to be the correct replacement for about $13.00.

After removing the cabinet door, and then about about 20 screws to get behind the monitor panel, I remove the old switch and start connecting the three wires to the new switch. As I make the third and final connection I hear a pop at the back of the coach. Probably nothing. I flip the monitor panel over, now in my lap, and test the switch. Nothing. So maybe the pop was something.

I try swapping out the fuse and immediately get sparks and another blown fuse. Ooooookay. Has to be my connections. I remove the wires, double check the diagram, and reconnect.

I’m just going to leave this one alone and disconnected for a bit. So I put the monitor panel back in place, but only put in a couple screws so the tech that looks over my work (for $115.00 per hour) doesn’t waste any time getting to the switch. Meanwhile I tap the other switches to make sure everything is still functioning and now the LP Gas switch works intermittently. I’m thinking the cluster of wires all smashed together behind the panel has something to do with this. So that brings me back to the leak that was fixed last month but not really. Clarke Power Services, who does engine/chassis work, was happy to take a look and even said it would be free if it was something related to the original leak from last month. So I retract the slides, retract the leveling jacks, and off to Clarke I go. Again.

2 days later, Clarke calls, a bit confused. They can’t seem to get the leveling system to function. At all. In order to reproduce the suspected leak they needed to activate the leveling system, but when they turned it on, they saw smoke coming from a melted wire. They stopped, replaced the wire and tried again. Nothing. And now they call me to see if there are any additional fuses that they weren’t aware of, and where they might look. Man, if you’re not aware of additional fuse locations, how the hell am I? I’m half tempted to give them a link to my blog so they can familiarize themselves with my unfamiliarity. If nothing else, it may elicit a sympathy discount.

It was 4:30 so they said they would take it up again Monday morning. But Monday comes, and no call. Fine by me, I didn’t really want to know anyway. Tuesday comes and I get the call. They need to replace the leveling system, and it’s not going to be cheap. $1400 and change for the parts. Plus labor.

The previous owner purchased a 1-year transferable bumper-to-bumper warranty, which was zero help last month with my other claims. I’m not holding out much hope this time around either, but I make the claim nonetheless. So now I wait. For a phone call from some 18-year old warranty rep, sitting in a call center, who can’t wait to call me to tell me no.

And so the Beast sits. Ready to devour my wallet once again. Hungry Beastie.

Your prayers are needed people. And cash. Prayers and cash please.