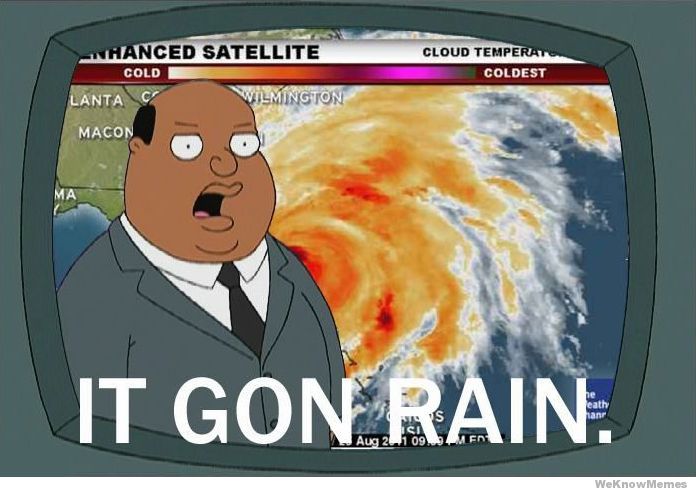 For real. Like 15 days in a row, rain. Didn’t stop us from hiking and exploring a lot of what Oregon had to offer, but c’mon man. Everything was wet, all the time, and living in an RV just amplifies that. It’s like living inside a sponge. We weren’t wet per se; we were moist. Constantly. And everyone hates “moist.”

We pulled into Columbia River RV Park on the northern edge of Portland, just 1 mile from Vancouver, Washington, in a slight drizzle. The park itself was fine…mostly concrete and tight parking with tons of spaces, but it was clean and well maintained. Upon exiting the coach to hook up, I noticed a hissing noise coming from the front end, like pressurized air being released. I had actually noticed it a state or two ago, but didn’t think much of it. Just figured it was normal. Now that it was louder, that feeling of normalcy was eroding faster than the air was escaping from…somewhere…hell I don’t know where. I would get to it, but not until California. For now I would continue to write it off as a pressure-release valve thingy that, you know, happens. And such. I did poke my head under both wheel wells a couple times in search of a large, red flashing arrow pointing to the escaping air, but alas, there was no such arrow.

Portland was fine, for what we saw. We didn’t really explore it all that much. It’s a lot bigger than I realized. I guess I thought it would be smaller. I don’t know why, I just had visions of a quaint city a lot smaller than, say, St. Louis or Kansas City. I was way off. I’m just not a city person anymore. I don’t mind visiting them, briefly, but then I want out. I avoid crowds at all costs anymore and absolutely despise traffic. Maybe I’m turning into my father.

So what to do outside a big city, in near constant rain? How about a (mobile) home improvement project? After about a half dozen trips to Home Depot for a faucet (and every other part and piece I forgot during the process) the chore was complete. It felt really good to spruce up the Beast, even just a little bit. Up until then we hadn’t really done anything to it to make it our own inside. At some point Aiden had tacked a giant leaf to a wall, but other than that, the Beast was about the same as when we picked it up.

After home improvement time, we journeyed over to Washington Park to see the International Rose Test Garden, because for some reason Trip Advisor listed that as the number one thing to do in Portland. Maybe it was the time of year, or maybe I could care less about roses, but I wasn’t feeling it. The family wasn’t either. Plus it was sprinkling rain. Not enough to soak you, just enough to be annoying. You know, moist.

Maybe that’s why there are so many breweries in Oregon…it’s something to do indoors out of the rain. Currently there are 84 in the Portland metro area. 84! More than any other city in the world! It’s practically raining beer! It caused me great anxiety not being able to visit each and every one. So instead of dragging my family all over creation in search of the perfect brew, I decided to pick up every 22-oz. bottle of local beer I could find. It became an obsession. First I went to Belmont Station, a bottleshop boasting over 1,200 beers, and picked up a box full of local brews. Another day I went to John’s Marketplace, home to over 800 beers, and added to my collection. I even hit up gas stations and Walmarts in search of local flavors. They were everywhere. It was glorious. Only problem was, I had to get all these beers back on the bus without Aimee noticing. I mean, she’s cool with me bringing in some here and there, but I don’t think she planned on us becoming a full-on mobile micro-brew distributor. I was only able to actually store a precious few in our refrigerator, since space there is at a premium. Luckily we have a huge basement. I even left a few in the back of the tow car, stashed inside my rubber boots so they wouldn’t break.

The one brewery in Portland we actually did visit, Ex Novo, did not disappoint. They made a sour stout that was unreal. I’m a big fan of stouts, but this sour thing was totally new to me. The combination of the two flavors was amazing.

After stocking up on Oregon micro brews we left Portland, in a slight rain, and headed for Pacific City on the coast. The drive was supposed to be about 2 hours, but we always manage to add an hour to our travel times. This leg was no exception. The road wove back and forth and back and forth through Tillamook State Forest, and up and down some crazy hills. It was pretty hairy, mostly because we were in a 40-ft. rig towing a vehicle… in rain…which was steadily picking up. Oh, and fog. I had to pull over countless times to let the line of cars behind me pass. It was slow going for us, and anyone stuck behind us.

By the time we pulled into the Thousand Trails Pacific City RV Resort the rain was coming down in buckets. The entrance to the park is on a slight decline, so as I pulled to a stop in front of the check-in office, all the water on the roof came rushing forward over the windshield. Then I heard it. The unmistakable sound of running water where there shouldn’t be running water. I quickly glance right, left, then back to the right to zero in on the source…behind the front cabinets above the windshield.

And now my roof is leaking. Long pause. Eyes closed. Deep sigh. The odds of us ever selling this thing seem to diminish more with each state line we cross.

The pat, pat, pattering sound of water falling onto a soft vinyl dashboard is eerily similar to that of someone peeing in my cornflakes.Thankfully it was kind of a quick stream that ended shortly after it began. I scramble to soak up the water on the dash, and dab the cabinetry. And then I hear it again, from the driver’s side of the coach this time. A second leak. Of course there is. Because one person peeing in your cornflakes isn’t enough. You need two streams.

Can’t say this came as a total surprise. When we first picked up the Beast I noticed the roof had some pretty nasty spots that needed to be patched. I bought all the materials I needed over the summer, but didn’t get around to fixing it. I had climbed up on the roof several times, but it was well over 100 degrees up there and I couldn’t stand it for more than about 20 minutes before being drenched in sweat. I figured it could wait for cooler weather. I waited too long.

The RV park itself was pretty cool. Beautiful, but quite rustic. The roads were narrow and rough and wound throughout the heavily wooded park with what seemed to be no rhyme or reason. I would get lost a number of times during our stay.

All spots were first-come, first-served, so we had to drive around in our tow car a bit to figure out the best spot for us. Honestly, at this point I didn’t really care. My spirit had been “dampened” a bit. (Get it? See what I did there?) Perhaps a nice spot on the edge of a cliff so the Beast could just roll the hell off.

10 minutes from our site was Pacific City. Population of just 1,000 and change. Aimee and Christian decided to run into town to scope it out and get a glimpse of the beach, while I sat and sulked a bit. They returned a short time later, this time Aimee insisting I go with her. I obliged. Begrudgingly. The beach did not disappoint. It was cold and drizzling a bit, but the sun poked out long enough to give us an amazing sunset. 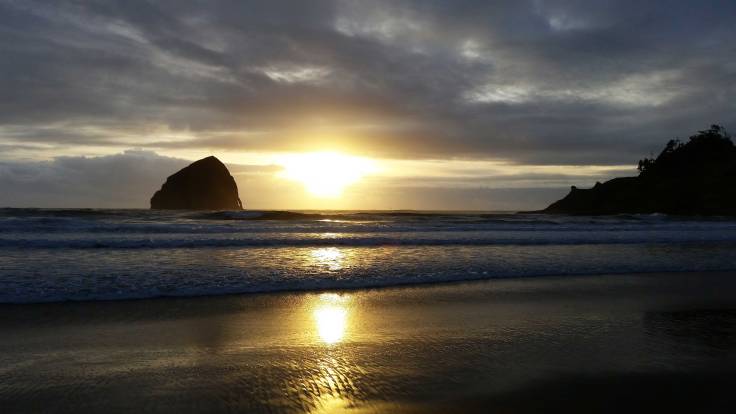 To make things even better, the parking lot to the beach is shared with Pelican Brewing Company. Yes, a brewery in a town with 1,000 people. Suddenly life starts to make sense again and I find the strength to smile.

In the morning we had a few rainless hours so I got to work on the roof, stripping away the old weather-damaged sealant and laying down a 4-inch wide strip of Eternabond. It’s kinda like duct tape, only a lot thicker and stickier. And once it touches something…game over. It was a messy, tedious task, but had to be done before the next rain, which, no doubt, would most likely be any minute. I was able to get the front of the coach completed where we had the leaks, and even part of one side before the rains started up again.

We stayed just outside of Pacific City for 3 rainy days before moving on. We made a couple stops before heading down the coast to another Thousand Trails property in Florence. The South Jetty RV Camping Resort was similar to the property in Pacific City. Beautiful wooded property with narrow winding rough roads. We parked the rig and again drove the tow car around to scope out the perfect site to park and hook up. After settling on one we attempted to move the Beast into position. With Aimee outside at the rear of the Beast guiding me in, I edge back. Then forward. Then back again. Then a loud crunching sound, followed by Aimee yelling “NO, NO, NO, NO!!!!!!”. 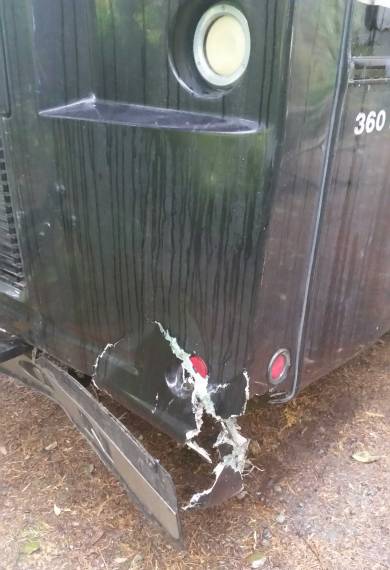 We’re still not 100% certain how it happened, but I managed to back over a tree stump moving forward, with Aimee guiding me. It was a massive stump that I cleared while backing up. Near as we can tell, the stump repositioned itself underneath the rear passenger side of the Beast shortly after I cut the wheel and moved forward, taking with it a large section of fiberglass. It sounded horrific. “Expensive” always does. So we’ll just add that to the ol’ honey-do list, along with that mysterious (yet totally normal) hissing noise from the front.

Despite our misfortunes, and daily rain, we really enjoyed the pacific coast. Truly, it was unlike anything I had seen before. The scenery was breathtaking. 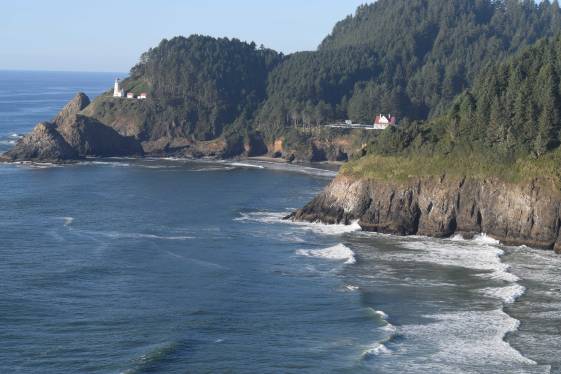 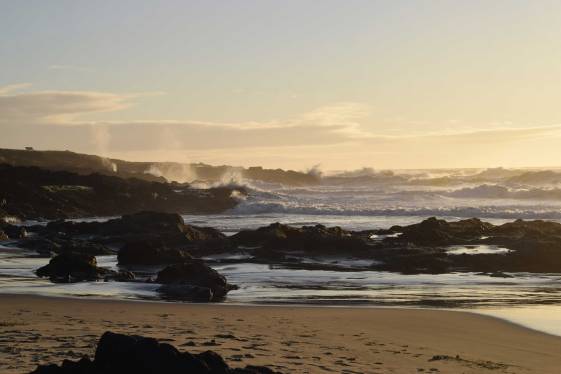 Normally when I picture oceans and beaches, I don’t envision “green” for the surrounding landscape. I reflexively think “brown”. Sure, I picture palm trees here and there, but for the most part I’m picturing sparse vegetation, brown sand, whatever. Like Florida, or much of southern California. They’re both beautiful, no doubt, but Oregon really made an unexpected impression. One I won’t ever forget. The thick, lush green forests run right up to the ocean, the way a tropical rain forest might. 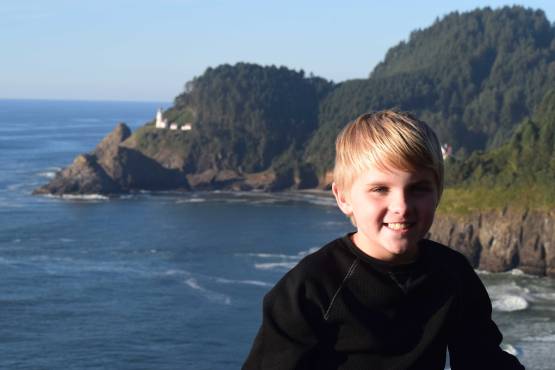 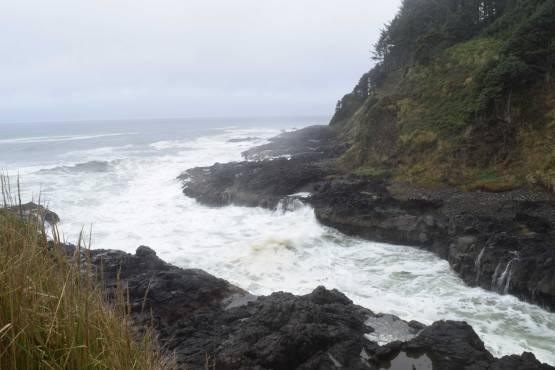 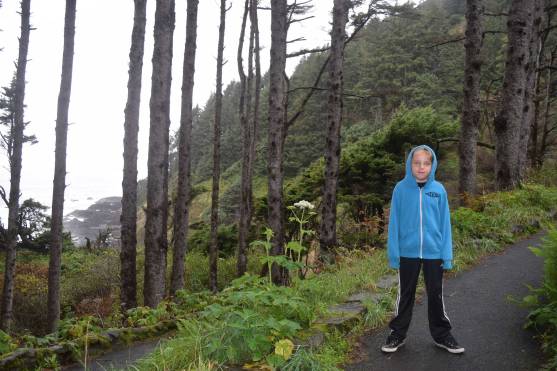 Something about deep green pines, ferns and moss nestled against the beach took my breath away. I could live there. I want to live there. Alas, I promised the boys we would return to Missouri after this excursion came to an end. In Missouri’s defense, it has…trees. And Branson. And other stuff I guess.